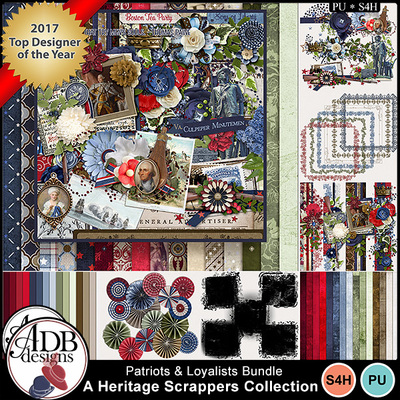 More By This Designer

ADB Designs 's Terms of Use for this kit.

How do you know what Terms of Use a kit has?
Look in the lower right corner of the kit preview for one or more of the following icons.

“The Revolution is usually portrayed as a conflict between the Patriots and the British. But there is another narrative: the bloody fighting between Americans, a civil war whose savagery shocked even battle-hardened Redcoats and Hessians. As debate and protests evolved into war, mudslinging and rhetorical arguments between Rebels and Tories evolved into tar-and-feathering, house-burning, and lynching. This quote is from ToriesFightingForTheKing.com, very shocking, but true.

These were our ancestors fighting on both sides passionately for what they believed to be the proper future course for this new land. When the war ended, some Tories returned to England; many fled to Canada and the West Indies -- but not all, some Loyalists stayed right where they were, and some moved west and started over. As you research collateral families you may find some of these migrating groups.

Included in the Patriots & Loyalists Bundle:

Information about this product: